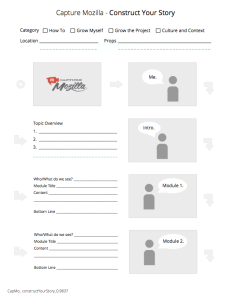 Video knowledge sharing is only successful if people create knowledgeable videos. As a designer, if something is repeated many times that is a clue that there is opportunity for better design. I kept hearing that people wanted to make videos but had trouble translating their idea into a video. I knew I could help.

The design challenge was to create something that not only helped the process of going from video concept to video reality but did so in a way that was fitting to the Mozilla culture. As such, it had to be a tool but not a restriction, a guideline not a rule. More so, it had to invite participation and encourage people to bring themselves to their video.

I designed Construct Your Story document to put the video in a understandable perspective where someone can see the entire view of how a video can go together and play with what they would want to talk about, the Mozilla way.